I found the following excerpt after a search prompted by the motivational quote shared by my recent guest, Ron from Los Angeles: “Because I can.“

“Because I can, I do what I do. It’s not to squander or waste what I’m capable of doing, or what I’m gifted to do. It would be a shame… to squander what other people don’t have as the luxury to do what I can do.”

The story has appeared on various forums and throughout social media, and while everyone has different motivations for their journey, I thought this might resonate with some of you Scale Warriors.

Here is the excerpt:

I’ve spent the majority of my life in gyms, but sometimes I find inspiration from depressing things, I’ll share a true story that makes me go through hell a lot of days because I simply can. 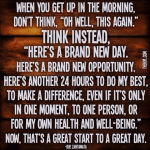 When I was in the ER one time for a broken bone, they pushed a kid past me and he ended up like a curtain or two over or whatever. He/she I really couldn’t tell had leukemia/cancer something that made them bald, and very frail, they were probably 10/11 or something but looked like a starved sick six year old.

I’m waiting by myself so I’m hearing everything going on, and some people come to talk and real quickly my stomach gets that cold type feeling because I realize they’re either from make a wish or more likely relatives talking to the kid about what they’re gonna wish for. I sorta wish I didn’t hear what was said as it literally is something I think about at least once a week or so.

“So if we go to Disneyland I can be anything as well?”

“Yeah, we’ll get you dressed up and you’ll go as anything you want”

Kid replies “Because Goonies never die, and I won’t have to be in heaven first waiting for you guys by myself.” 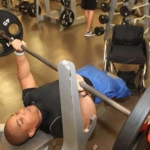 I don’t how this comes across on text, but in person it was said with the voice of hope, like a young kid has figured out how to avoid the death that they’re trying to face. It was said with such honest and innocent sincerity, that I hobbled out of room into bathroom to literally cry like I don’t think I ever have. about someone I never really saw or knew but was clearly on their way out of this world.

So instead of Natural Born Killers by Ice Cube or something that i used to listen to, i just remember parts of that story and I push through pain, and roll a few more times or drill technique.

So people are used to hearing me say “Because I can” when I’m killing myself or pushing harder than they think is healthy and probably guess I’m saying it trying to be a bad ass. In reality it’s all based off of that one experience.

Fellow Scale Warriors, life is a gift. Your health is a gift. What will you do with your gifts today, because you can?