I once heard this analogy about a golfer who had won an amateur tournament that allowed him to compete in a Professional Event. This golfer had idolized all the golfers on the pro tour and had been playing his entire life for an opportunity like this. The day of the event came and he rose bright and early to take a few minutes early and get to the event early to hit a few balls so he’d be nice and warm for the tournament. 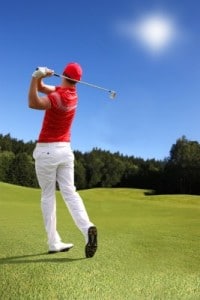 He was surprised to see relatively few people getting ready there but shrugged it off and went about his driving and putting practice. After he was done, he saw some of the players arriving, including one he particularly was fond of. He worked up the courage to say hello to one of his childhood idols and they spent a few minutes chatting when he finally worked up the courage to ask why the professional golfer hadn’t shown up early to take a few practice swings and putts. His answer is the moral of the story and our topic:

“Listen kid, if you didn’t bring it with you, you’re not going to find it here.”

Like many formerly obese people, I always thought getting healthy would be the answer to all my problems:

In my mind, Healthy, Happy and Wealthy was that pot of gold at the end of a rice cake and treadmill filled rainbow. And I know this is a website dedicated to the greatness of physical health, but I’m going to share a cruel reality with you today:

Getting healthy isn’t going to make all your problems go away. As the great philosopher P. Diddy once intimated Mo’ Money brings Mo’ Problems and the same can even be true of Mo’ Muscles.

We spend a lot of time as weight loss bloggers talking about the how. Sharing meal plans, workout regimes and bragging about the latest in diets. When people ask me how I lost weight, they are looking for words like Paleo, Keto, South Beach, Shake, Running, Walking and Lifting. They don’t want to hear about changing the way you think because they don’t want to admit that they were broken.

At least that’s where I was.

I remember reading Body for Life by Bill Phillips and getting so frustrated with the fact that this guy had the nerve to address my weight as if it was some kind of mental thing when it was clearly just a Doritos issue. He says in the book:

“Somewhere along the line, slowly and gradually, without even being aware of it, we give up. We give up our values and our dreams one at a time. When people let go of their bodies, it is, quite simply, the beginning of the end.”

Two things happened when I read those statements:

1) I realized that body builders really enjoy commas. We spend a lot of time talking about drug abuse and other problems rampant in the sport. At what point do we address the fact that Bill uses 8 commas per sentence in this book?

2) I became pissed off because I bought this book for a magic pill that would make me get healthy. I don’t need counseling! I’m happy and mentally sound but fat. Can you help a brother get ripped over here or WUT?

So I put the book down. And I think I went to get a Spicy Chicken Burrito from Del Taco. Del Scorcho Hot Sauce wins again.

I’m healthy and fit. I’ve run a Triathlon. I’ve squatted one plate (I thought I was Arnold that day). I’ve got veins in my arms, guys envying and girls ’mirin. Life was perfect now because Bill Phillips said if I get this stuff in order then everything else will fall into place, right?

What Bill is absolutely right about is that the failure to care about your body will and probably already has crept into other parts of your life. I don’t know anyone who is over 100 pounds overweight that hasn’t become apathetic in other areas of their life. It just doesn’t happen. Chances are your health isn’t even the first thing you became apathetic about. Maybe you also drink too much or you’re a procrastinator at work or you cheat on your taxes or you roll through stop signs.

Losing weight is like getting to the driving range early on the day of a professional event. If you don’t bring the mental changes needed to be a different person with you or find them along the way, you aren’t going to be magically gifted with the right thinking you’ll need when you hit your goal weight. No amount of rice cakes or treadmills can help you psychologically, emotionally or spiritually.

Getting physically healthy might make you a little better but you need to do more than lose weight to solve all of your life’s problems. And if you don’t deal with the stuff that got you there in the first place, chances are you’ll relapse faster than you can say Dorito (my first word as a baby and a recurring theme in my writing).

I don’t know what the issues are that led to your obesity, but my recommendation has been and remains the following:

If you have lost any significant amount of weight, you should see not only a personal trainer to learn your physical limitations and potential, but also a mental health professional to take an inventory of the thought patterns that led to your obesity in the first place.

To wax introspective for a moment, when I finally sat down with a mental health professional, I found that I had some messages still speaking to me from my youth. I struggled with a need to be perfect that came from some experiences early in my life. I was able to go back and work through these things and accept my shortcomings and found internal beauty in my imperfections. I had to learn how to forgive myself which was enormous because it helped me to find the strength to forgive myself for letting my body go.

Would you look at that? Maybe Bill Phillips was right the whole time.

But not about the commas. Seriously, Bill, do you really, really need, like, so many?