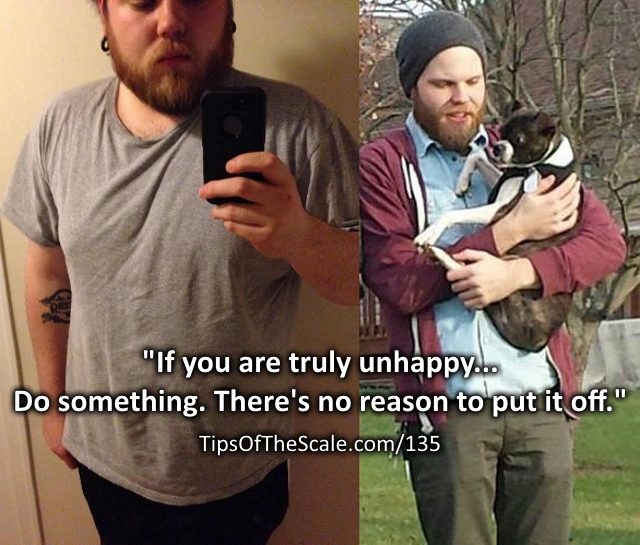 “If you mess up one day, you’re not going to gain all the weight back the next day.”

Sean says that as far back as he can remember he was always the heavy kid.

His whole extended family loved to cook and eat, and they made great food. Holidays and family events were always big occasions for food. Sean grew up in this type of family environment and also shares:

How Being Overweight Impacted Sean’s Life

Sean is shy by nature, and moving to a new state at the beginning of high school was challenging for him. Experiencing life as the not just the new kid at school, but the new and heavy kid was rough on Sean’s self esteem.

In high school Sean lost 100 pounds (45.5 kg), but he gained all that back and maybe more during college.

“I hated myself heavy.”

Putting on all the weight that he had lost before made Sean feel really angry at himself, even though he knows you shouldn’t hate yourself that you’re heavy.

Sean emphasizes that someone is still the same person inside whether they are heavy or thin. He says that losing weight doesn’t necessarily change your life around, “you’re just in a thinner body.”

Sean saw a set of progress pictures on Reddit (r/progresspics) that showed physical changes for someone else—an average person, not a super athlete—over a year’s time, and he thought:

“There are no excuses anymore.”

“I always hate to be that guy that’s…the new years resolution thing, because everyone does that. But for me, I knew that I had to do something.”

Because Sean had lost a great deal of weight in his fairly recent past he decided to implement a few habits that had helped him succeed, including cutting out red meat and substituting pretzels for regular chips.

Before he started his weight loss the second time around, Sean says in college and after graduation he enjoyed drinking. Sean says that in law school some days he would eat a 14” sub before going out to a bar, and then order pizza and wings back at home with his friends.

His commentary is that “unless you’re an 8 foot giant,” no one ever needs to eat a 14-inch sub.

Sean figures that at this time of his life he probably consumed upwards of 5000-6000 calories some days. His first step was cutting back on alcohol calories. Next, he worked to give himself some “boring” meals.

Sean has a twin brother who is losing weight alongside him. When they started this journey, for a long time each night they ate the same dinner: a baked chicken breast or baked fish and a baked potato. Basically, Sean says he was eating a rotation of the same 3 meals for 9-10 months. He liked this system because it eliminated some decision-making, and simplified things.

“Making the most bland, boring dinner” takes some of the fun out of eating, which was his goal. After the initial period of weight loss, Sean says finding a low calorie curry simmer sauce from Trader Joe’s to which he can add chicken and veggies is a marvel of variety.

Sean still only eats red meat every once in a while, and reserves any small serving of junk food for once every few weeks.

What Sean Learned About Food, Exercise, and Himself 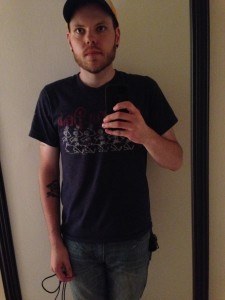 Sean says that he feels the journey is 99% mental, a “mind game.”

The diet portion of his journey seemed comparatively easy this time around, primarily because he knew how he had eaten before when he lost weight. Since his diet was somewhat lacking variety, Sean took one multivitamin each day. Sean ate about 20 baked potatoes each week, but otherwise ate pretty low carb and low fat.

Sean credits his results to straightforward calorie counting and making sure he ate enough protein. He only allowed himself 1200 calories each day starting out, and now Sean thinks maybe that was a bit too low. Recently he looked up his TDEE and 2300-2500 calories is now what he aims for each day. His focus is on lean protein and vegetables.

Sean was avid at reading labels and comparing things like turkey versus chicken, and he was always seeking out what food he could eat the most of for the fewest calories. “I swear, you could eat 7 bags of chips…you’re never going to be full.”

Because Sean had lost weight before and gained it back, Sean says that friends who have known him a long time don’t really discuss his weight with him. Sean feels that in general people like to avoid the topic of weight loss, and are concerned that discussing it makes the person who has lost weight feel awkward.

Sean likes having a set schedule for himself at the gym so he doesn’t have to worry about the weather, or the gym being crowded, etc.

The small gym at his apartment complex is what Sean uses now, and he spends most of his time on the elliptical. Sean loves the elliptical because it is easy on your joints, especially if you are carrying extra weight as you begin exercise.

Sean says that he was very adamant about exercise at the beginning of his journey, and aimed for exercising 5 days each week for 45 minutes each day on the elliptical and treadmill. Sean exercised at the highest intensity he could for 40-45 minutes in a row. Now at maintenance he goes to the gym more sporadically but walks his dog for exercise. Even if he’s not at the gym now, he works to “stay off the couch” as much as he can.

Challenges Sean Faced Along The Way

Sean says that his biggest challenge was being patient when his weight might fluctuate seven pounds over the course of a day. For him that felt very defeating, even though he knew it was most likely changes in water weight. And he says plateaus were also discouraging, but he urges folks to “keep the big picture in mind.”

Sean is finishing up law school in Pittsburgh, Pennsylvania and mostly feels that he has reached his maintenance weight. He says as he looks back he really wishes that when he had lost all the weight the first time that he’d had a system in place to monitor any regains he was experiencing and get right back on track.

As he lists excuses he had told himself in the past of why he wouldn’t be able to lose weight, Sean thinks that there’s no point in making excuses, that you are only harming yourself.

Sean’s Advice For Your Journey 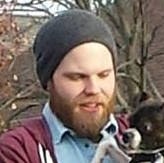