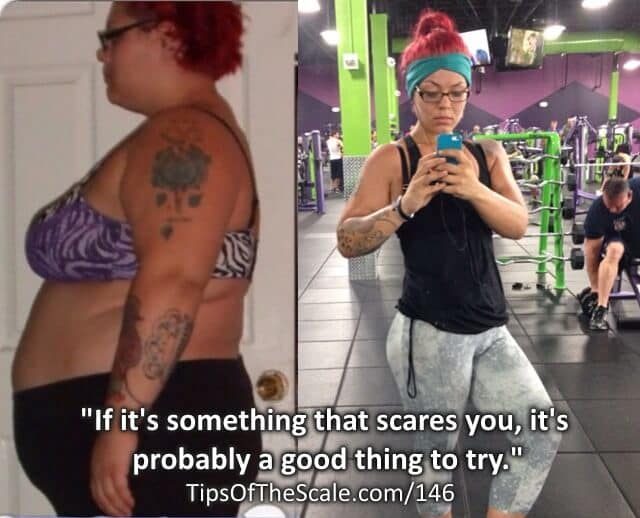 “If it’s something that scares you, it’s probably a good thing to try.”
Jillian Michaels

Ashley battled depression and weight issues until she experienced a rude awakening about her health. She chose better health and took control of her future. Ashley talks body image, accountability buddies, and the power of social media.

Ashley shares that she has been overweight since birth, and other family members tend towards the heavier side. She was a big baby, and her family even called her “sumo” as a kid when she was in a diaper.

Even in elementary school, Ashley says she was bigger than other kids in her class. Over the years she says that she would try fad diets and would lose weight, but then would gain it all back.

Ashley shares that for many years she was ‘eating her feelings,’ and has battled depression since she was young.

“Unless the only problem in your life is that you’re overweight…you’re not going to be a completely happy person once you lose the weight. Every other problem is still going to be there besides the fact that you don’t have to shop in plus-size.”

How Being Overweight Impacted Ashley’s Life

Ashley says that for years she was convinced that you could be overweight, healthy, and happy all at once.

“I honestly was in so much denial about my weight having any impact on my quality of life.”

Ashley admits that she’s a “great actress” and put on a happy face to the world for a long time. She says that only now at a lower weight does she have something to compare her earlier happiness to.

When thinking back about jobs and social opportunities, now Ashley can recognize that she probably had missed opportunities from her size, but since she was in denial at the time, she couldn’t see it. Because her weight hadn’t caused any actual health problems at one time Ashley reached a point of acceptance of her body, but she says society puts folks in a kind of body shame—no matter your size.

Ashley shares that therapy has taught her that shame is the most toxic emotion you can carry around with you. Ashley feels that her experiences with being overweight have helped her become a more compassionate person today, and she knows there is a lot more to people than what you see on the surface. She says that what you learn on a weight loss journey in no small way changes the way you perceive the world. Ashley discusses that her weight loss started with both a series of events and a specific moment.

She recalls enjoying watching documentaries about food, but without specific weight loss goals or a clear plan. She was a regular blood donor, and when a nurse made a comment about her blood pressure during a donation, Ashley was taken by surprise.

The nurse had fully expected Ashley’s blood pressure to climb – and was clearly surprised it had taken so long – and this shocked Ashley. She recalls the realization that she didn’t want to be the “fat and unhealthy” stereotype. At this point Ashley weighed 300 pounds (136.4 kg), and realized that her size was her own making.

She says she was well aware that she had not been eating healthy and had not exercised since high school. Finally she told herself:

“I have a choice right now: It’s either health or sickness, and I would be a complete a–hole to choose sickness.”

Ashley had her realization towards the end of the year, and she says she went to Domino’s and ate a large pizza all by herself as a last hurrah of unhealthy eating. She says that the next morning (December 29th) was the first day of the rest of her life, and she was so ready she didn’t want to wait the 3 days to start as a New Year’s Resolution.

Initially, Ashley says she just started counting calories to learn and practice portion control, while eating most of the same foods she usually ate. She began to work to slowly clean up her eating. Ashley started to cut down added sugar, and continued being a vegetarian, but she moved her focus to vegetables and fruits instead of bread and cheese.

Ashley tries to drink up to a gallon of water each day. Ashley says that since she was mostly eating out of boredom or for emotions, the portion control was not hard to get used to, but the exercise was hard. The first week Ashley did some lunges and jumping jacks, and the next week she started an in-home workout. She says she felt extremely self-conscious and didn’t want anyone to know what she was doing.

“I was embarrassed, honestly”

—she didn’t want people to assume she was going to fail before she even got to try and start, or to absorb anyone’s subtle negativity into herself. Ashley shares that at this point the most challenging part of her journey was feeling like she was alone and working in secret. Still, Ashley discusses that she wanted to see some results before telling anyone what she was doing, so she would be taken more seriously.

Soon thereafter, Ashley used the Sparkpeople website to find an accountability buddy, which made the next part of the journey easier for her, particularly for sticking to her exercise. Ashley says that when it’s 10 p.m. and your roommate just brought home some Oreo cookies, that’s a great time to be able to speak with an accountability buddy.

Ashley and Sam discuss how an accountability buddy does not need to be a person you know in ‘real life,’ but a stranger who you can text with might be all you need. The important piece is finding someone who is on the same path as you. The weight loss struggle in an of itself is enough of a common factor that you can get along and help each other out, even if you have no thing in common (political, religious, family) at all in the rest of your life.

Ashley started her home workouts with a “super modified” version of the Insanity DVD, and focused on small goals. She says that she didn’t join a gym until she’d been on her journey for about a year. For Ashley, blogging created a sense of accountability, and was a great place to unburden her feelings. It made sense to Ashley to continue that tone with sharing things on her blog that others in a weight loss journey normally don’t want to admit. Her blog helps her not feel alone, and hearing others share the same struggles is very therapeutic.

A blog is also a great place to discuss struggles and problems that a weight loss journey may trigger, to get to the root of eating triggers or moods. Ashley says:

“Unless the only problem in your life is that you’re overweight…you’re not going to be a completely happy person once you lose the weight. Every other problem is still going to be there besides the fact that you don’t have to shop in plus size.”

“I didn’t realize social media would have such a big impact… but I really owe it a lot of my success.”

Social media is also helping Ashley in maintenance, as she says she can feel the 26,000 eyes of her followers watching her, and she doesn’t want to crush people’s hope that weight loss and maintenance is possible.

What Ashley Learned About Food, Exercise, and Herself

Feeling the sense of empowerment through her weight loss journey has been the biggest change in her life. Ashley feels like losing weight is comparable to climbing Mount Everest, in that she now thinks she can do really anything, since she already did the most difficult thing in the world that she thought she couldn’t do.

These days, a typical week for Ashley involves a meal plan based on what was healthy and on sale at the grocery store. She is still a vegetarian and eats about 4-5 times each day. She eats a protein shake for breakfast, (as long as it’s a good clean protein powder) and lots of hummus, vegetables, and fruit smoothies.

Ashley says as she began to cut down on takeout and processed foods, she got better skills in the kitchen as time went along. These days she says she knows exactly what’s in all her food. Ashley usually exercises 5 days a week. At first, it was more like exercising 20 minutes each day and she would add 10 minutes as time went by. Ashley made sure that she committed to herself that no matter what; she would give herself 30 minutes of exercise. Ashley says that now she has started running, “which is insane, ” and likes to follow training guides and run/walk programs.

These days Ashley always takes the stairs when there’s the opportunity, and parks far away from places she’s going. She shares that seeing your body do things you never thought was possible makes you want to do those things and push boundaries. An excitement emerges about your body and finding what your limits are.

Ashley is now an online weight loss coach, and is also attending school to become a nutritional coach. She hosts a private support group online, complete with accountability buddies. She is also working towards teaching live fitness classes.

Seeing the successes of others is very rewarding and Ashley feels it benefits her just as much as it benefits them. While Ashley has been a hairdresser for years, she now wants to spend her time devoted to health and fitness as a full-time career. Ashley says she is excited to start teaching classes and wants to run another Spartan race soon. She is currently working on a memoir.

Ashley’s Advice For Your Journey

Ashley shares that her pet peeve in the health industry is the myth that there is only one program that will work, and that transformation happens quickly. Ashley likes to emphasize that there is no quick fix. Another thing that bugs Ashley is that it seems to her that the world is obsessed with protein! Ashley likes to point out to her clients that unless you are a bodybuilder, you don’t really need tons of extra protein apart from what you eat at meals when you are losing weight.

Ashley doesn’t let the opinions of other people affect her decisions or mood. “If they haven’t done what you’re trying to do–their opinion doesn’t count!”

Don’t be embarrassed or even think about what other people think of you. No one else’s opinion matters but your own. Realize that you can do this and that you are worth doing this for. 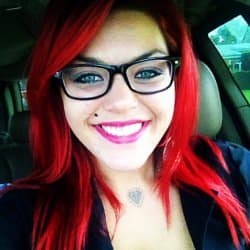