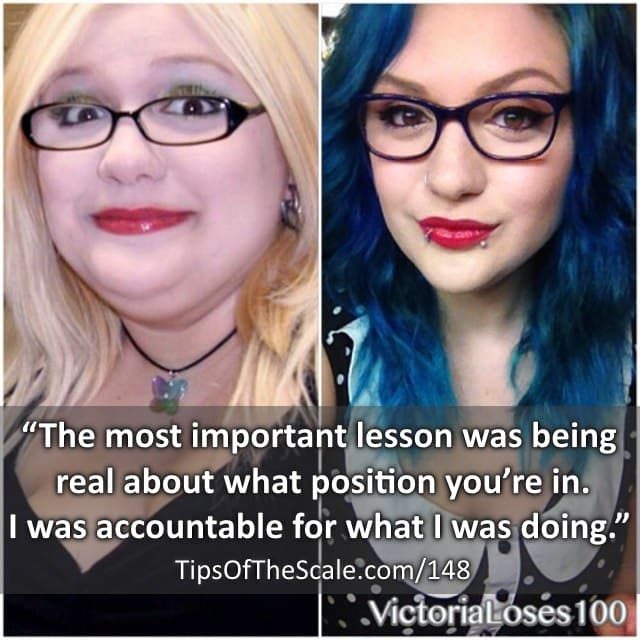 In a very low moment in her life, a television show about dramatic transformations gave Victoria the boost to transform herself.

“Beginning today, treat everyone you meet as if they were going to be dead by midnight. Extend to them all the care, kindness and understanding you can muster, and do it with no thought of any reward. Your life will never be the same again.” Og Mandino

Victoria says she used to be a bully in middle and high school, and during her weight-loss journey she realized that she wanted to make up for the actions in her past and be kinder to people going forward in life. This quote is her favorite reminder to prioritize that.

Victoria says she weighed over 200 pounds (91 kg) by the age of 11, and that her weight gain began in the first grade. She said that she didn’t get bullied over her weight when she was young because she was always in classes with the same people throughout school.

She discusses how her parents really tried to get her involved in sports and to go to a nutritionist when she was growing up, but nothing that they suggested to her had much appeal. She actually says that she took the advice from her parents to get more active just the same as she would listen to them tell her to clean her room or something, just a suggestion.

How Being Overweight Impacted Victoria’s Life

Victoria has a strong personality so she does not feel like her weight impacted her life very negatively much at all. However, certain things she can recall do stem from being heavy. She shares that a lot of the time she felt self-conscious as a kid. She can remember all her friends giving her their leftover food at lunch, and once when Victoria said she didn’t want something, they asked if she was okay.

At her school’s field day she always just knew she would be last— Victoria says it was just a fact of life for her, not really a ‘bad’ thing.

“I was in complete denial about just how big I was.”

Victoria thought all along that, since she was well proportioned, she wasn’t actually overweight, and she would ask her friends at school to compare her body to other “fat kids”—a fact she’s not proud of. However when she was around 20 some health problems began to creep up, such as the need to have her gallbladder removed. Victoria says that all through her late teen years she always promised herself that she would lose weight before she turned 21.

Victoria says she went through a bad breakup, quit her job and left behind everything in her life to move to south Texas to take care of her elderly grandmother. She says at this point in her life she “hit rock bottom.”

Victoria shares that she is bipolar and has a history of major depression and at the time was not medicated. Because of her breakup she was crying a lot, she was suicidal, and she was very isolated in this small Texas town. Her grandmother was very ill and her grandfather was blind. As she helped them, Victoria could really feel the love and devotion between her grandparents, and was struck by the example of what true love looks like. Being around this part of her family caused her to feel some shame for her handling of her breakup, and gave her some perspective on life and what was going to be important for her going forward.

Since there wasn’t much to do in this town, Victoria was watching just about every show available on Hulu. One night she happened across a recommendation for the show “Extreme Weight Loss” with Chris Powell. Victoria says she stayed up all night and watched every episode.

Though the participants vary, usually in each episode clients lose 90-120 pounds (41-55 kg) in 3 months. Victoria told herself that if those people can lose that much weight in 3 months, she could lose 100 pounds (45.5 kg) in the span of a year. Victoria decided to take a year to lose weight because on the show she noticed that the contestants were very heavy, and that the heavier they were, the faster they would lose weight at the beginning. So she started her blog right away, weighing 250-260 pounds at the time. (113-118 kg) 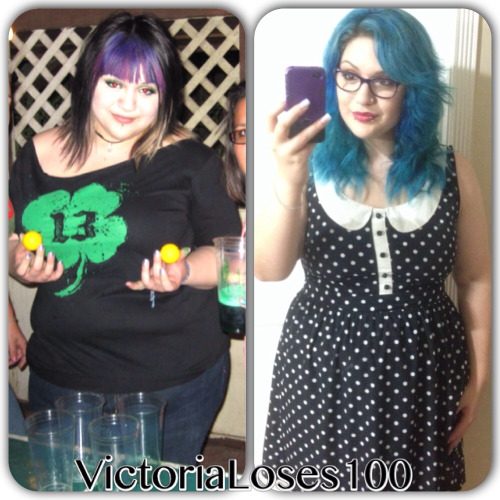 Victoria says she started her weight loss journey by making small substitutions in the foods she was already used to eating—light sour cream for regular, wheat tortillas for white, using almond milk in her cereal.

She also started trying to run on the track in front of her grandmother’s house. Her cousin is very fit, and so he became her ‘coach.’ For the first 3 months. Victoria says she didn’t really exercise much at all. Victoria read Chris Powell’s book, Choose To Lose, and decided to implement the aspects of his plan that fit with her life. Discussing this book, Victoria says:

“The most important lesson was being real about what position you’re in.”

She emphasizes that it’s very important to look in the mirror and take notice of what your actual body parts look like; really be honest with yourself about what has happened to your body. Coming to the realization of how her body really looked and felt, Victoria says:

“It was really sad for me…I did this to me.”

Accepting this realization was tough and she was angry with herself that she had let herself gain so much weight. 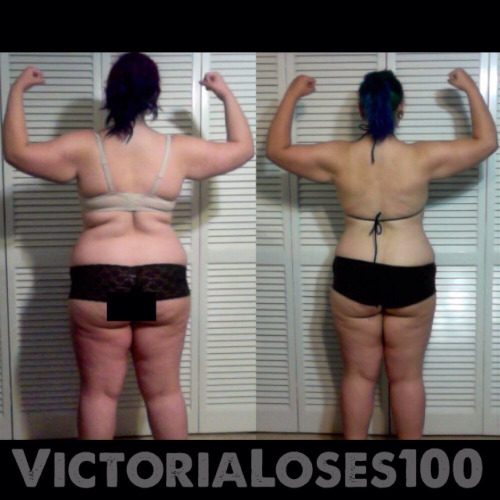 Challenges Victoria Faced Along The Way

Victoria shares that the most challenging part for the first 3-6 months of her weight loss was “trying to find something that worked.”

She began to take photos of everything she was eating as a kind of food journal. Victoria says while she knew what macronutrients were, she had never really applied them to her life before, and had never understood how important protein was. Didn’t like vegetables but forces herself to eat lettuce.

“I was accountable for what I was doing.”

Victoria says she felt very motivated as she gained followers on her website. Victoria shares that once the had lost enough weight to fit into a size 14 pair of jeans, she immediately started crying in the dressing room, because she was actually scared of being skinny.

Victoria explains that she was sexually assaulted when she was young, and during her weight loss journey she realized that one of the reasons she probably gained weight was to keep people away and not draw attention to herself physically.

She told herself that if a person didn’t want to date her because she was overweight, then they didn’t deserve to be with her. And while she carried around extra weight like a shield, she finally realized, “It’s actually destroying me.”

As she lost the weight and consequently gained more attention, Victoria had to remind herself that she could handle it, since she is strong now and is not a victim anymore. 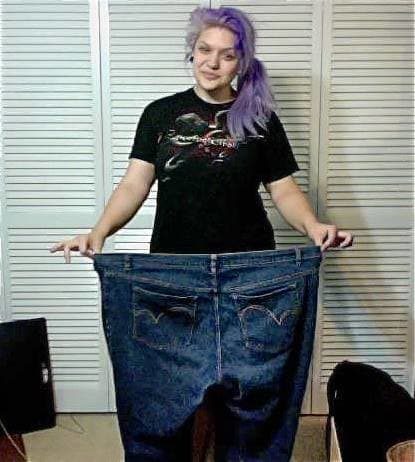 What Victoria Learned About Food, Exercise, and Herself

Victoria was open about her attempt at weight loss on FB, and was rewarded by getting connected with a FB weight-loss support group through a friend. Victoria thinks this community had a lot of positive influence on her journey and she found it very encouraging to her to see what workouts and food people were sharing on the site.

While she doesn’t really like exercise, Victoria says you just have to do it. Victoria’s dad is a running enthusiast, and so initially she thought you would have to run 5 miles each day for something to count as ‘exercise,’ and she discovered that is certainly not true.

“Exercise is really not hard.”

She stresses that super-simple workouts can be very effective. Just get moving! Victoria used a c25K program running walking style program to up her mileage. Through her own weight loss example, Victoria has inspired a classmate from high school to lose 142 pounds and a former co-worker to lose 80 pounds.

Victoria says that people often ask how long the weight loss journey took her. She asks “WHY?” She highlights the importance on not setting a date for the finish line, and like to tell others that how long the journey is doesn’t matter, but simply that they are making the choices that put them in the right direction for a healthy life. 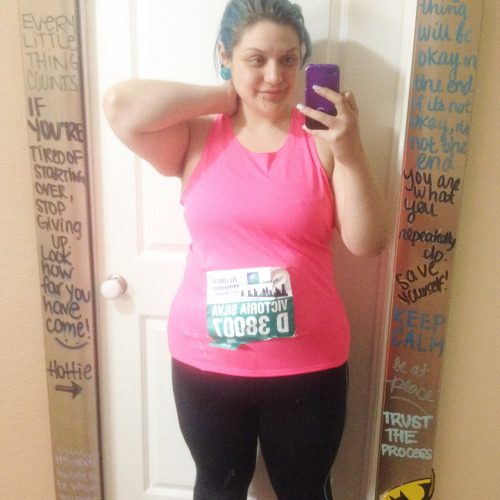 Victoria lost 98 pounds (44.5 kg) in 12 months, gained some of the weight back, and has been slowly losing again. She ran a half-marathon a few weeks ago, and is now going to ease up on the distance running. She says her body feels healthy now, her blood pressure has gone down, and she needs to remember her ‘why’ so that she can stay motivated.

Victoria wants to lose the rest of her weight so that she can get skin removal surgery later this year. Victoria suspects that the fact that she doesn’t eat clean and that has affected the ability of her skin to bounce back after her weight loss.

Victoria’s Advice For Your Journey

Before you ever even embark on a journey, you really have to nail down your ‘why’ because you need that reason during the rough, boring times of the journey. Figure out a way to make your ‘why’ framed in a positive way. Fitting into a bikini or getting ready for a wedding are not big enough why’s. Wanting to look good is fine, it’s just not enough of a reason for everyone to stick with a long goal.

Never stop trying and never give up! Accountability is key. You can eat “like crap,” but still be accountable for it and record it. You can have a bad day of eating, but be honest with yourself about it. 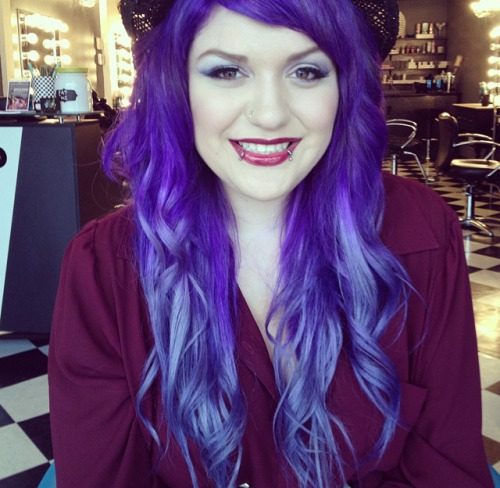